The boys’ and girls’ 2021 tennis season is underway

The boys’ and girls’ 2021 tennis season is underway 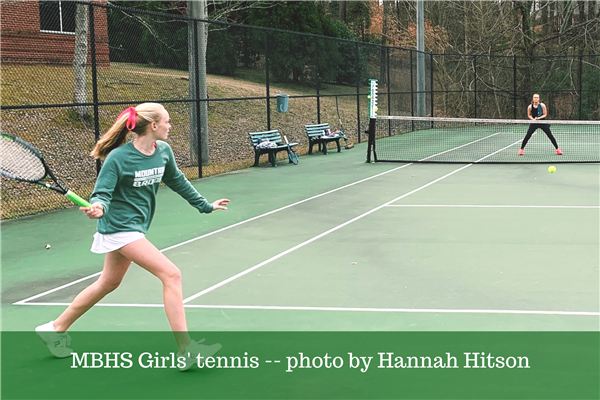 Last Monday, February 1st, Mountain Brook Boys Tennis team had their first match at Hoover, followed by the girls team on Tuesday. Both teams won, and the girls stood out with their 9-0 win.

The weekend before their first official matches, both teams played in a tournament at Hoover where the girls placed first and the boys placed second.

The boys team beat Jemison, John Carrol and Chelsea, but they fell to 7A-team Hoover. Sophomore Carter Goodson said, “We fought hard, and we will win next time.”

Coach Susan Farlow also sees potential success and improvement from the boys team after some of her players heal from injury. “We are going to have to play around with the line up and find our strengths,” said Farlow.

The boys team has three returning seniors including Sam Chitty, Drew Gresham and Ethan Shunnarah who Farlow believes will lead the team to a state championship.

Farlow also predicts a strong season from the girls: “The girls are strong as ever. I expect great things for them.”

“After winning our tournament and our match against Hoover, I think it really gave us a lot of confidence, especially because our team is very young and has 6 freshman,” said senior Kate Jeffcoat. Other returning senior girls include Emma Karcher and Warner Johnson.

Both teams were robbed of a 2020 season that would have been their last in the 7A classification due to the pandemic.

“I feel certain my girls would have won their 4th [7A] state championship in a row,” said Farlow. However, Farlow believes her teams will have success in the 6A classification as well.

“In 6A, we haven’t played these teams on a regulars basis, so we’ll have to go out and expect to battle at every match,” said Farlow, “[but] we should make it to state.”

The Spartans’ new 6A section includes teams from Homewood, Oxford, Pell City, Montgomery Academy and Briarwood, and the top two teams get to compete in the State Tournament.

The shift from 7A to 6A will be a change, but both teams have hopes for a successful season. “Moring down to 6A and seeing completely different teams will be an interesting matchup, but I think this team is really strong,” said Jeffcoat.