Breakfast options on the go: A review

Breakfast options on the go

Too many teens forgo the “most important meal of the day.” Some may think  they will be late to school if they make breakfast while others choose sleep over food. However, you can have the best of both worlds by simply taking breakfast on the go. Recently, I tried six quick breakfast options found at a local grocery store  and then judged them based on taste, price, and time. 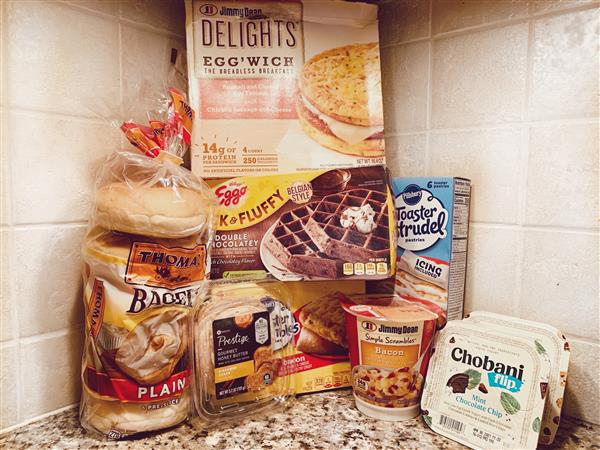 You need this honey butter in your life. It is a socially and lawfully acceptable drug. . I will not lie, I did eat a spoonful by itself. It balances so well for a sweet and savory breakfast. Its taste is similar to regular cinnamon toast, but the elevation provided by the honey butter melting directly into the cinnamon…so scrumptious. The crunch of the toast with the melted sugar will make your taste buds, heart and soul sing of happiness. Throw two pieces of bread in the toaster, pack your backpack, slather your toast and head out the door with a breakfast that will make you beam with satisfaction.

A tried and true classic for those with a sweet tooth, toaster strudel is a treat for breakfast. The strawberry filling was not too sweet and it balanced with the flakey crust and icing well. Time wise, students can easily pop this in the toaster while they are getting their backpack ready to go and grab it on the way out the door. The only problem I had was that after one go-through the toaster, it looked cooked and ready, but the middle filling was still cold. Thus, I would suggest two minutes in the toaster as opposed to one. 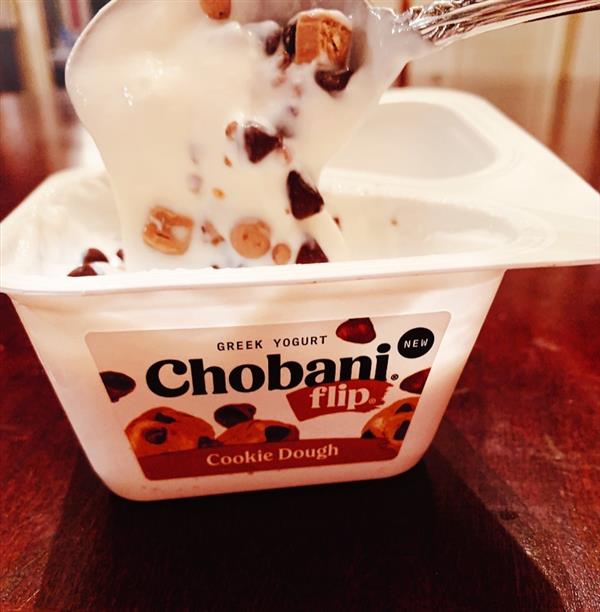 Yogurt is a hit or miss and it often depends on the mood of its devourer. However, Greek yogurt is fantastic for gut health, so when I saw this new flavor of Chobani Flips, I was intrigued and eager to see if a healthy digestive tract was waiting in my future. Cookie dough and Greek yogurt? An exciting combination reminiscent of frozen yogurt with cookie dough that is able to mask the sour undertones of traditional Greek yogurt. I was pleasantly surprised by how tasty the Chobani Flip was. Another plus is that all you have to do is pull one from the fridge, snatch a spoon and you are out the door. If you are a yogurt person or even someone who is on neutral terms with yogurt, this is a lovely option to kickstart your morning.

I had such high expectations for this waffle because the chocolate chip Eggo waffle was a Hitson house favorite when I was in elementary school. Additional chocolate in Belgian style sounded like an improvement to something already great. However, I was disappointed at first taste when I could not taste the chocolate. If I were blind folded and told to taste this “chocolatey chip” waffle and a plain one, I would have a hard time telling them apart. All this being said, it is still a solid choice if you want a quick, easy and plain waffle to throw in the toaster for a minute before you rush out the door, this is a solid choice. If you have an extra minute then you can even add a fun topping to jumpstart your morning.

This idea was very intriguing to me because: you open the package and there are two other packages inside which do not seem environmentally friendly. Regardless, one had two eggs and the other had cheese and bacon bits. To cook, you shake the eggs in their package, pour them in the main container, cook them in the microwave for 50 seconds, take them out to mix with the cheese-bacon mixture and finally cook for another 45 seconds. I did just this, but had to do extra time in the microwave because the egg was so runny. After the first round in the microwave, only the top layer of egg was cooked and the rest was still raw. I poured the toppings in and had to spend a minute stirring and breaking up the stiff-ish layer of egg with the raw part. I then put it in the microwave for a minute. Overall, it tasted exactly like any other microwaved egg item, so if you like that taste it is a fine option. However, due to the slightly extra time and the mediocre taste, I will not be purchasing again for $3. I would rather put that towards another container of Cinnamon Honey Butter.

I was drawn to these because I enjoy a nice Toaster Strudel, but I have never heard of a savory option. Though it is a quick option to throw in the toaster, the cheese tasted violently fake and aggressively processed. The texture also threw me for a loop. The flakey pastry and odd consistency of the cheese combined to literally make me sad.

You make wonderful  strawberry and  chocolate strudels. Stay in that lane. Artificial cheese does not look good on you, babe. Know your strengths, Sister Sledge.