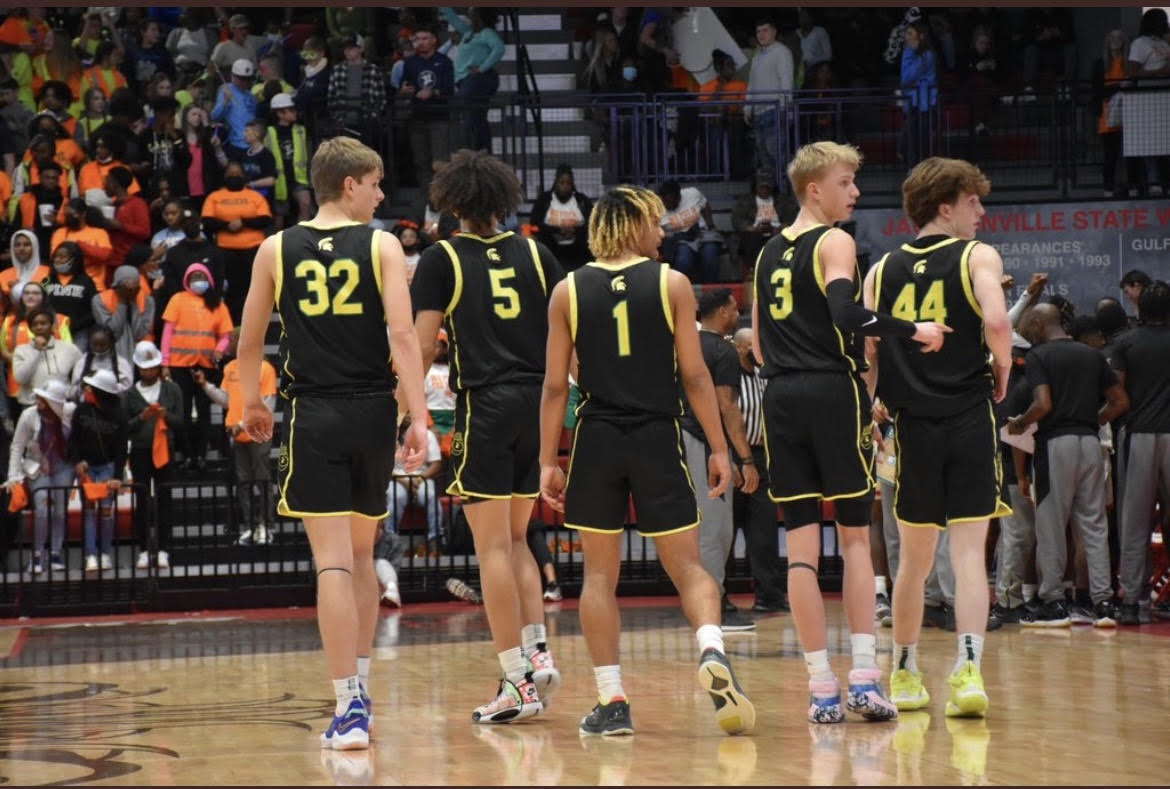 The Spartans saw their season come to an end on Monday, February 21st at the hands of Huffman in the quarter finals at Jacksonville State University.

The loss marks the final game in the high school careers of Charlie McKimmon, Dive Rowe, and Parks McLain, all of which were members of the 2021 State-Championship-winning team.

“The feeling [after the loss] was something I will not miss, but that does not take away from what our team as a whole accomplished,” senior forward Charlie McKimmon said.

Throughout the season, Coach Davis made several remarks about how the seniors set the tone for the rest of the time, specifically following Mountain Brook’s Senior Night victory over Briarwood where Coach Davis detailed what made this class unique.

I love how these seniors are tight knit and care about the younger guys. They are extremely unselfish and they bring positive energy everyday,” Coach Davis added.

Davis also emphasizes that this year’s seniors have left a legacy with the Mountain Brook program and will be missed by their peers.

“Charlie, Dive and Parks are great people first and foremost and the leadership and legacy they leave to the underclassmen is something for all of them to strive to be,” Coach Davis added.

After Davis replaced Bucky McMillan last season, Davis felt pressure to replicate the success McMillan had, and many questioned if he was the right man for the position.

“[My favorite memory from my time with the program was] definitely winning the state championship after all the doubt and hate when Bucky left,” senior forward Dive Rowe said.

Despite high expectations following the 2021 state championship title, the Spartans managed to finish first place in the 6A Area 9, finishing with a record of 29-5 with a record of 6-2 in league play. Despite the loss, maxpreps.com ranks the Spartans as the fourth best team in the state of Alabama. Along the way, the Spartans beat three top 25 teams in the state, including third ranked Eufaula. The team finished off the season averaging 63 points per game while only allowing 49.9 points per game.

While the team did not reach their ultimate goal of winning the state championship, Head Coach Tyler Davis remains proud about his team’s overall performance.

“I’m most proud of how hard they worked to accept their roles and buy in to be great,” Coach Davis said.

As for the team going forward, they will be carrying the same mentality engraved that Coach Davis engraved in their minds.

“In order to win a state championship, it will take a lot, and that’s not what our focus is. We focus on winning each day, and if we win enough days, we are going to max out on our full potential, whether that is winning a state championship or not,” sophomore guard Ty Davis said.